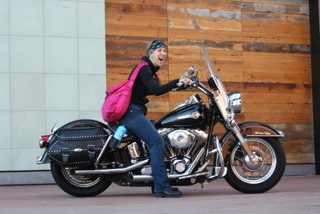 All That Glitters Is Not Chrome.

Lots of women like bling, but mine weighed a fully loaded 933 pounds. and went up to 150 mph.

Even though I was born in a small town in the Midwest and raised to love classical music, pumpkin pie and the practicality of science, I’ve always had a thing for motorcycles, and Harley’s in particular.

So when I bought my first hog, 15 years ago, I was over the moon. I loved everything about it, the deep rumble of the pipes, the sense of freedom it gave me and the wise, grizzled crew of Vietnam vets and a couple of independent women I rode with on weekends. Community glitters, especially a pack of people watching your back on those hairpin Colorado mountain roads. Raw power glitters too, particularly for a girl from Illinois.

Last August I rode my Harley from Colorado to Canada with my friend Pat. At 64, Pat is the real deal, having put over 75,000 of cross-country miles on her 2008 Harley. We had a great time in Canada and, after 1,300 miles, had just crossed the border back into the U.S. when Pat’s bike was hit.

It was the best type of motorcycle accident, the kind that happens in a parking lot when no one is even on the bike. In fact, we were standing right next to our bikes parked in front of a McDonald’s in North Dakota, when The World’s Most Apologetic Farmer looked the wrong way and happened to back into Pat’s bike, crunching her fender into the frame and bending the back wheel.

The folks at the Harley dealership, which was, conveniently, right down the street, were also real salt-of-the-earth kind of people. They gave us red carpet treatment, proving that, like chrome, unexpected kindness glitters too. Pat and I spent 2 days there; while she and the Harley bike mechanics assessed the options for repair or simply replacing her beloved Heritage with a brand new bike.

We talked with every mechanic and salesperson who worked there, completely impressed, as if there was some actual law behind the billboard we saw on the North Dakota highway that said, simply, “Be Nice.”

On day two, the manager caught me gazing longingly at the bike of my dreams, a 2014 Road King in Vivid Black with cruise control and accented white wall tires.

“Take it for a test ride!” he said. We chatted about my work history, and I told him I had worked as a buyer for an outdoor company in Chicago before moving to Colorado.

“Really,” he said, leaning in, “You know, Harley Davidson is looking for a Motorclothes Manager for this region of the country; you’d be perfect for the job.”

And there it was, glittering right in front of me, The Dream Job. The chance to work for the brand I had loved for so long, to spend all my days with the Unbearably Nice People of North Dakota, outfitting kick-ass Harley riders and getting full medical and dental. What could possibly go wrong?

I did take the Road King for a test ride. It was like riding on a cloud, so the next morning I was trading in my ’04 Heritage Softail for a great deal (with employee pricing) on the new bike. And, just as a formality, being interviewed for the position of Harley Davidson Regional Motorclothes Manager.

We negotiated a trial period that included me traveling to Nashville for the Annual Harley Dealers Convention in one week’s time. By that point, the whole damn world was glittering. What could be better, I thought, than getting to live inside the world of a product I had loved for so long?

On the long ride back to Colorado, Pat and I dodged a couple of speeding tickets while we tested out our new six speeds. But the tickets were simply a symbol of the manic pace I’d just signed on for. I had only two weeks to get to the convention in Nashville, sell my home in Boulder, and head up to North Dakota. To live.

The truth is that possibility glitters most of all. I had been craving a new adventure for a long time. Okay, so North Dakota was never on my bucket list, but I figured I could learn how to winterize my car, keep my gas tank close to full at all times in case I got stranded in the snow and learn how to stay warm in -50 degree wind chill. And the General Manager suggested I could teach yoga at the dealerships.

And for awhile it worked.

And then it didn’t.

The Harley conference in Nashville was three, 14 hour days spent in a huge convention center filled with beautiful bikes, crazy characters and more leather and chrome than I’d ever seen before. And a few days later, driving north to my new snowy town, with my husky dog and a carful of necessary possessions, I felt like a million bucks. I was thrilled by the adventure of it all; new job, new town, new community, a whole new me.

Normally we jump into new things one thing at a time, but I chose to take them on all at once, and even my first weeks living in the local Comfort Inn didn’t dampen my spirits. At work in the Harley dealership it felt like I had been given the keys to the kingdom. I was in charge of ordering products and deciding how they would be displayed, allowing me almost complete autonomy and creative license. The idea of being the one in control glitters too.

But then, inevitably, the cracks in my utopia began to appear. There were a few people, okay more than a few, who didn’t adhere to the Be Nice billboard. One customer, in the store to replace the control on his heated jacket simply sneered at me and said, in perfect seriousness: “You don’t know anything, do you?” In the days that followed, there were many more like him.

I was hired because I am a woman who has ridden Harleys for over 15years. So when a nice woman wandered in one day to look at buying her first bike, I struck up a friendly conversation. There were no salespeople at all on the floor but within minutes I found myself being shouldered rudely out of the way by one of the salesmen saying, “Don’t pay any attention to her, I’m the guy you need to be talking to.”

Now I’m a fairly tough girl, and it takes a lot for me to get discouraged. I’ve enjoyed some good-natured down-and-dirty banter with my fellow bikers over the years, and I can curse like a sailor. But over the next few weeks the pattern of rude, disrespectful, and almost comically-graphic sexual harassment began to add up. Even my boring black yoga pants were like some sort of red flag I was waving in front of a pack of bulls.

Eventually, work and the town itself became like living in a battleground, with constant unwanted (and increasingly disturbing) degrading comments being sent my way. One co-worker, surrounded by a pack of guys from the Parts & Accessories department, seriously suggested I give “road head” in exchange for carpooling with him to work. At the DisComfort Inn I found that I had to run a gauntlet of drunken oil workers just to get to the front door everyday. By the end it was simply taking too much of my energy and time to put up with it all and avoid actually hitting anyone.

As a brand, Harley makes an awesome product and they want desperately to reach out to more women, more minorities and younger buyers. Those markets glitter for them, just as the job once had for me. But the culture they have created isn’t something they are ready yet to see from the outside. Of course the behaviors I experienced there aren’t limited to Harley or even to North Dakota, that type of assholery is, unfortunately, everywhere.

Just a couple months later, I drove back to Colorado thinking about how we, nearly all of us, tend to disappear into the products that we love. More than the insulting sexist comments, what truly hurt was the feeling of my dream life colliding with my reality.

We don’t just crave objects, we crave identities, communities to which we might belong. When we want something to be true (a job, a relationship, a town, doesn’t matter) we often will do anything we can to make it match our shiny vision. Our worlds are full of amazing things that glitter. Rather than simply noticing what draws us in, we need to go deeper and inquire, “Can I really live with the reality of what lies beneath the surface?”

For me, the trick was learning to honor the quality of how I was treated more than the glitter of the chrome. After the shine is long gone, what stays are the deeper parts of ourselves that are still around. That’s who we really are. That’s the real engine that takes us where we need to go. Taking a chance on a new life was a good thing. But knowing why and when to leave was better.