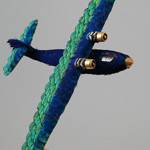 I never thought I’d be bullied by a 65 yr old man with a toy airplane.

Over a month ago, I was teaching an all-levels Standup Paddleboard Yoga class at a community lake. The class began like all the others I’d been teaching for the last three years: I did a brief on land introduction to paddleboarding and how to access yoga poses while balancing on the water. Then we launched our boards and paddled for about 20 minutes to a secluded area in the southwestern part of the water. On the way we paddled past an empty swim beach (which opens at 10am, the same time my class ends) where 8 men, ranging in age from about 65 to 75, were lined up in camp chairs, a couple of them holding remote controlled airplanes in their laps. One man stood at the edge of the water in front of a motorized fishing boat, watching our every move. I waved to them as I always did, in my ongoing attempts to share the same area in a friendly way, even though I knew what was coming.

The man staring at us looked like any other 65 yr old white guy who spends endless time near the water. He sported an old grey tee shirt, tan shorts and a faded maroon ball cap worn by days in the sun. His only distinguishing feature was the wicked smirk on his face.

There had been a progression of incidents, beginning with my first class when maroon cap man motorized his way into the center of our group, demanding that I move my class so that his crew could safely land their planes in the water. After complying, I made a special trip over to the beach to introduce myself to the group of aviation afficianados. Maroon cap man gruffly acknowledged my introduction but didn’t give his name in exchange for mine. The other men behind him remained silent, with expressions of vague amusement on their faces.

But on this particularly sunny Monday in early August, I was approaching the midpoint of leading the class through asana on the boards, or as I call it, ‘Aqua Asana’, when my voice was completely drowned out by the roar of two model planes traveling in circles, only five feet above my student’s heads. I turned around on my board and looked towards the old men aviation crew. Expressionless, they kept their planes circling. I motioned dramatically with my paddle. Planes kept circling. I paddled up to each student and motioned for them to assume a childs pose, prone on the board. I then paddled the 200 yards towards the aviation assholes like I was winning the Paddle The Rockies Race.

I could feel my blood boiling. Later, I would see the irony that I couldn’t see in the moment: I was teaching something centering and balanced and in the middle of teaching it I had become enraged.

“What’re you guys doing?” I demanded.

My stomach felt like it dropped into my heels.

“Excuse me?” I was trying to not let them see me shaking.

I could hear the smirk in his voice. He kept going,

“I bet Donald Trump would just love a gal like you!” He was sneering as he held up his wooden oar and came towards me.

I fought back tears.

I grew up with a violently angry father so when an older man comes at me with violent anger, it affects me at deep primal level. Despite knowing this about myself, I could feel my face flush with my own pent up rage at feeling helpless and afraid. I paddled away sobbing behind my large black polarized sunglasses. After making sure my class was safely completed, and apologizing for the absurd interruption, I fought the overwhelming urge to run over maroon hat and all the aviation assholes with my car. The only thing saving me (and them) was my thought of next day’s headlines: “Homicidal Yoga Teacher Maims Geriatric Lake Enthusiasts.”

Instead, I took appropriate action and notified the management of the lake who responded with the utmost support. My shoulders heaved a sigh of relief when the lake management team, which happened to be all women, emphatically agreed that those guys were way out of line and suggested they should be refused entry. The head manager went so far as to say, “ Yeah, those guys are so terrible; we’re always having to get Lake Patrol to retrieve their planes from the restricted Wildlife Sanctuary area.”

It took me a few days to realize that I had been teaching Peacock Pose when the planes began bombarding my class. The significance is strong; less about the actual form of the pose, and more the underlying meaning.

Peacocks aren’t very particular with regard to what kinds of food they’ll eat: the brighter in color the object is, the better. In fact they will even eat poisonous snakes if they come across one that’s colorful enough. Just for the sake of amusement they will follow around a slithering, poisonous snake for a while, observing it curiously before they devour it. And it is said that the poison they ingest from plants and snakes actually makes the colors of their plumage all the more vibrant and beautiful. Is it possible that all of our own poisonous emotions (rage, fear, anxiety) are simply the opportunistic ingredients that, when properly digested, can provide the colors that make our lives rich?

Once again, I’m reminded of the myriad of ways in which the practice of yoga, in all it’s forms, inevitably invites us to look at things we might rather run away from. There might be hidden pockets of rage or fear laying dormant within the calm exterior of a yoga teacher, or student, or even a dude with a model airplane and some serious boundary issues. In the end it wasn’t about who was right and who was wrong. What mattered was that it gave me another chance to face the emotions that used to control me, and realize that they don’t control me anymore. Yes I got mad, but in the end I just stuck up my colorful feathers and walked away.

What do YOU do when an old fear or anger that is triggered by a person or situation?