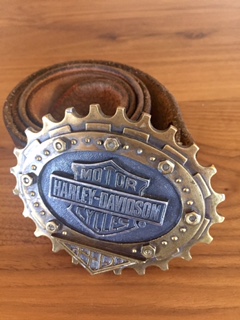 In midst of hoards of bikers honeymooning with their motorcycles, I decided to call it quits. As it is with the ending of any relationship, this one had been rocky for quite some time. Of course in the beginning I was in love and it was blissful, from the moment I saw my first Harley.

It was early June of 1978, in central Illinois, when the air was still cool but held the promise of heat that would be liquefying asphalt come August. I dropped my mom’s hand in the Kroger’s parking lot, blinded by sunlight glinting off the thundering pipes, and watched the burly bearded driver and his much younger looking blonde passenger cruise around the corner until my neck hurt. I felt a longing that was much deeper than the one I’d had for a Cabbage Patch doll. I was the only one of my friends who didn’t have one; and, as I’d later discover, I was probably the only one who’d fallen in love with Harley Davidson at the age of 6.

“Lisa Renee, come here please,” my mom said, with the tone of voice that let me know she’d been repeating my name for awhile.
“what are you looking at?” she asked me. “Oh, “ I said, “nothing.”

A recent stat from the Department of Transportation, said that one out of every 36 people in the U.S. has a motorcycle, and in 2001 I became one of them. My first bike was a Harley Davidson 883 Sportster, ’01, with Pearl White paint that became iridescent in the sun. For three years I rode that bike. And I didn’t stop there. I did it all, I went on Rocky Mountain Oyster Rides, I had a dog named Harley, I bought fringed leather bustiers at Sturgis, and even got a job working for a brief, hellacious few months for Harley Davidson in North Dakota.

But as I was driving southbound on 1-25, the last weekend in July, 2015 just prior to the start of the largest annual motorcycle gathering, I saw scores of bikers with tents, leathers and coolers bungeed to their steel horses, heading north to Sturgis; a party the size of Texas overtaking the small town of Sturgis, South Dakota (population normally 6,700) on two wheels. Although this year commemorates the 75th Annual Sturgis, I knew that I no longer wanted to part of that crowd. Sure, I love the feel of the wind on my skin, the sense of freedom like none other, that comes riding fast on two wheels. But I’ve surpassed the love is blind experience I had with HD as a kid, and into my 20’s and 30’s. As I watched the riders thunder by, I no longer turned my head to gaze longingly. I knew this commemorated the end of my 15 year union.

This breakup took 9 months. A full term of toiling over whether I could continue to ride and hence support this company about which I now knew too much. Like I imagine it must be if a kid peered behind the scenes at Disney World; debunking the magic of what appears on the outside; so it was for me after working with and for Harley Davidson.

It was a difficult and emotional decision. Many of my friends with whom I rode gave me wide eyed looks when I shared that I may be divorcing