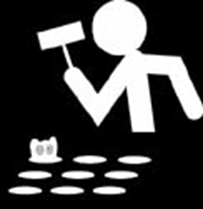 I never thought my life’s purpose would be largely influenced by a childhood arcade game.

The first time I ever heard the word, “Dharma” was in a vinyasa yoga class in Boulder Colorado, fifteen years ago. My teacher, Brandon began the class seated criss-cross-apple -sauce style, explaining to us that there is a purpose in all that we do; our dharma.

Not yet familiar with Sanskrit, the language that forms the foundation of Yoga, I thought Brandon had hiccoughed mid-word. What was the word he was trying to say, was it direction? duty?… And why the hell are we starting a power yoga class seated listening to chit chat? Just then, something he said cut through my irreverent irritation.

“When everything that we do and think is in alignment with our dharma,” he said “we experience boundless happiness, success and love — and in turn, contribute to the harmony and wholeness of the entire universe and everyone in it. My ears perked up. Hey, I thought, I want some of that!

My curiosity and quest for boundless happiness, success and love led me to take yoga teacher training (with the same teacher, Brandon), followed by studying for years with two Sanskrit Scholars. During those years I held the following jobs:

Although each job afforded moments of happiness, success and love, something was missing. It was as if I was chasing moles in the game of Whack-a-Mole. Just in case you missed the epic Whack-a-Mole craze in the 70s; it’s a game in which players use a mallet to hit toy moles, which appear at random, popping the moles back into their holes.

It’s as if each mole represented my various attempts to avoid what everything in my life is pointing to as my life’s purpose. Writing. Specifically writing this memoir, Thirst, which I’ve been working on for over 6 years now. Or has it been working me?

Every detour I took away from my true purpose was a mole:

As with most Sanskrit words, Dharma has many layers of meaning. Although it is often used to refer to our life’s purpose and the unique talent that each of us were born to express, there are many ways to utilize the word Dharma. So many in fact, that the appropriate usage /meaning of Dharma can become quite confusing. In the same way that we build anything, including yoga poses (asana), we create a strong foundation by focusing on the roots. The same is true with language. The root of the word Dharma is Dhar, which refers to a pillar, or that which upholds. As Brandon mentioned almost two decades ago, following our dharma rests on the certainty that each and every one of us has a unique role or purpose. It is the custom compass for every individual. It’s the action of behaving in integrity with our life’s purpose.

Playing the Whack-a-Mole game in my work life taught me many things, but the minute I truly sat down to get serious about my life as a working writer everything changed. I got organized, got into community with other writers, and began to step into the room with my readers. This commitment helped me realize that I am the only one who can do the work that I came here to do. Writing this book is my own Damn Dharma.

What are the Moles you have had to Whack in order to find YOUR true purpose in life?