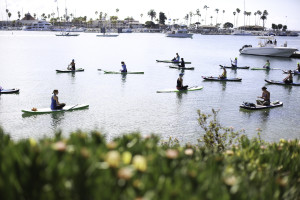 One of the first things I learned about yoga was how vital it is to feel the ground beneath your feet. So the first time I attempted a downward facing dog pose while teetering precariously on a standup paddleboard (SUP), I was pretty sure I’d lost my mind. Water covers more than 70% of the surface of the earth, and up to 60% of our bodies are comprised of water, but about 64% of the population is afraid of open water. As I moved painstakingly slowly into that first pose I quickly reminded myself that our first environment in life is the life-giving liquid of amniotic fluid, so some part of me felt right at home in that floating down dog.

One of the beauties of yoga is that the practice encourages us to move towards things we might rather move away from. It invites us to become curious about the places where we tense up, both in our bodies and in situations. SUP Yoga is a wonderful invitation to move, in a healthy way, towards these things. It’s a great practice for many, like me, who tend to get into the habit of putting my yoga mat in the same place, for the same yoga classes; to become aware of the things that we do in attempt to create an external sense of stability.

After all, why do I want a yoga practice that’s only good when things are stable?

I find that being on the water, and the instability of practicing yoga on the board, highlights my inherent instabilities. For example, when practicing downward facing dog pose on my standup paddleboard, I am acutely aware that I place more weight into my right hand, which causes the left side of my board to pop up. If I tense up, it furthers the instability of my balance on the board; but when I breathe and relax, I can tune into these nuances and stabilize. In SUP Yoga, we’re asking people to trust, to not tense up, to create balance out of releasing rather than clinging.

For the last 8 years that I’ve been teaching yoga, I’ve consistently said to students, “we really should be practicing outdoors, in nature.” The postures (asanas) are reflections of the natural world, such as Tree, Cobra, Pigeon, and salutations to the Sun. When we align our bodies into these shapes in the midst of nature, rather than indoors, we have a deeper opportunity to experience a sense of interconnectedness. The root of the Sanskrit word “yoga” is “yuj” which translates to mean ‘union’.

Shortly after purchasing a standup paddleboard, I began dreaming of sharing my love of practicing SUP Yoga, leading classes and retreats. Something I had to remind myself of as I was towing a young student back to land as I saw her struggling with sudden winds at the end of class. “Rachel, give me your anchor (our anchors are recycled Tide bottles, filled with sand), we’ll make it back as a team.” Rachel, a thin, tall, 20 yr old, was apprehensive of standing up on her board, I assured her that this practice, including the paddling, is about doing what feels right. As the other 8 SUP students were standing up, paddling hard to make it back to land, I saw that Rachel’s board wasn’t moving any closer to shore. But she had a big smile on her face when we pulled in.

These days I teach SUP classes on the usually-calm waters of Boulder Reservoir and Union Reservoir, with the beauty of the whole Front Range stretched out in front of me. My students are a motley crew, ranging from young college students, groups of friends in their mid 30’s and 40’s, to folks in their mid 60’s wanting to experience something new. In each SUP Yoga class, we spend the first portion of class on land, orienting to the board and basic paddle technique. We then launch the boats into the water, and paddle over to a secluded, tree-lined portion on the west side of the Reservoir called Dream Cove. After circling up, we drop our anchors and begin our yoga practice. Every class is a slightly different practice, including sun salutations and what I call the ‘Water Warrior Series” of postures. Some classes we use the paddles throughout our flow, and many times we rest them on top of the board. We typically take time towards the end of class to play with various inversions or simply explore more deeply any of the postures that we’ve done. Then we cool down with some restorative postures, during which I chant to incorporate the traditional, vibrational aspect of the yoga practice.

As we all take the shape of Savasana (Corpse or Surrender Pose) I trail my fingertips in the cool water, close my eyes and realize that, in discovering SUP Yoga, I’ve merged two parts of myself that have always been separate. My love of the outdoors and my longing to practice and teach yoga. As I feel the rippling waves from a far away speedboat, lapping under my board, I recognize that if I only know how to mediate when things are smooth, I’m kinda screwed. Whatever the reasons are that people show up to take a SUP Yoga class (to celebrate birthdays, to deepen an existing yoga practice, to try both yoga and paddling for the first time) I always hope that the ground feels different after they’ve practiced on the water.