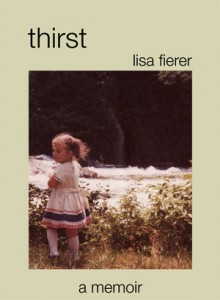 Growing up in Morton, Illinois, called the “City of beautiful homes”, Lisa Fierer had an almost perfect life. She was the youngest of four children born to Joshua, her well-respected pathologist father and her opera singer mother, Mary. But one day in December,1984, her life was changed forever. Called out of class to the principal’s office, Lisa was told that her mother had been killed and her father had been arrested for the crime.

Over the next twenty years, Lisa battles through school, addiction, relationships and various forms of self-destruction. Along the way she learns that the effects of loss, violence and betrayal create a deep desire for something different. Her journey takes her to doing yoga while sitting on her Harley, lost in the wilds of Wyoming, to the experience of death and rebirth in the Native American ceremony of Sundance, to mountain biking with elephants in Thailand, to the banks of the Ganges where she finally lets her Father’s ashes go.

Thirst is about the distance between the lives we are given and the lives we choose. It’s a story about survival, hope, yoga, self-discovery and the tremendous support of compassionate communities. It touches the part of each of us that longs for the healing power of laughter, the transformative force of forgiveness and the bravery required to learn to love again.